The observant reader will note that the last post was updated on July 29th, 2009! It was on that day that Laura and I hit the road with our fully loaded bikes to explore America as the PathLessPedaled. It feels very strange to read that entry. A year and a half has passed. A lifetime of experiences. 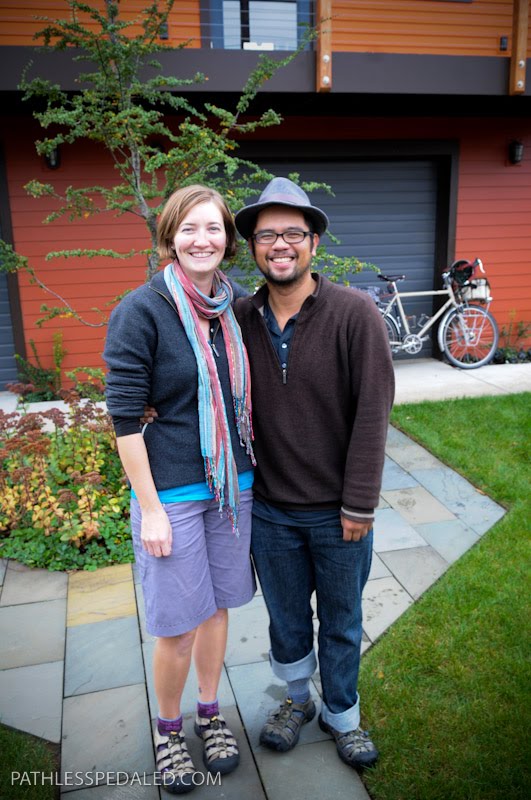 I now find myself in Portland. It is a little strange to be in this city that has come to symbolize so many things for us. A bike, beer, book and coffee utopia. We have visited Portland often in the last 7 years and now we find ourselves living here.

This blog was once about my work as the bicycling photographer, a bit of a freak show in Los Angeles. Now that I'm in Portland, there are bikes everywhere. This blog will no doubt take a different direction and to be honest I'm not quite sure what direction that is. I have the challenge of rebuilding a network and my business, of trying to save money so we can travel again and of re-entering the workaday world without being consumed by it.

So here I am, again. It feels like I'm writing a "first post" all over again. Hello world. Hello Portland.
Posted by RussRoca at 11:10 PM 1 comment:

Dear Readers,
I'm taking my eco-friendly bicycling photography on the road! My girlfriend Laura and I are doing what we've always wanted to do - an open-ended bicycle tour. I'm bringing a small (real small!) portable light kit to do work on the road. One of our goals is to find people that are living a life less ordinary. I'll be doing portraits and interviews to post on our site.

So, please point your browsers to:

Thanks for reading. This blog o' mine probably won't be updated as often anymore. I'm still available for assignments while we're traveling - so if you want me to do a shoot zip me an email! 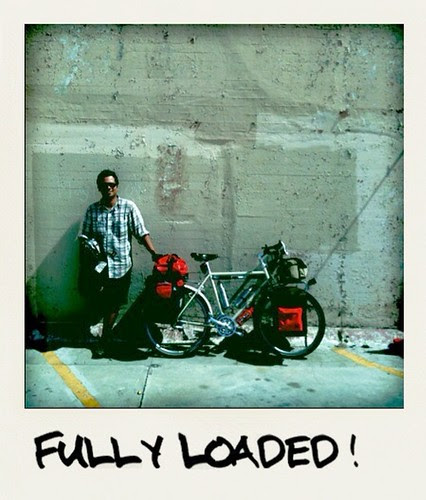 Posted by RussRoca at 2:45 PM No comments:

For those that don't know....I'm hitting the road. I've been selling most of my worldly belongings and am going on an extended bicycle tour with my gf. The goal is to cross the US, twice and head down to South America. Yesterday, I had to put my Bilenky cargo bike into storage. A bit sad since it has been so part of my business and my daily life.

Visit www.pathlesspedaled.com to learn more about the trip I'm going on. 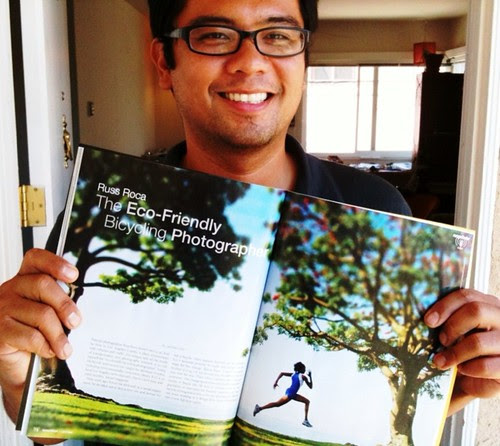 Just a slideshow of images from a recent shoot at MCH. It was a heartbreaking assignment because of some of the sad stories of the kids. Emotionally difficult, but I think I got some great shots.

Posted by RussRoca at 9:49 PM No comments: 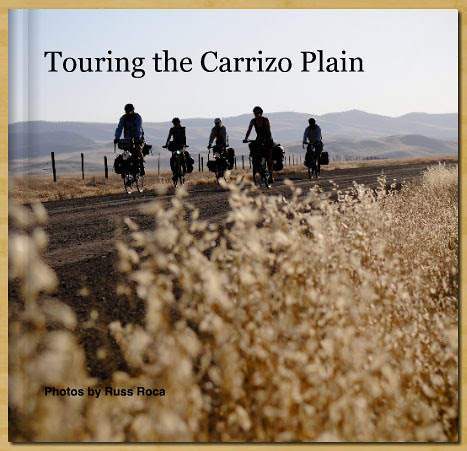 Ok, it's not Phaidon (yet) but it's still a nice looking book! A photo essay from my bike tour through the Carrizo Plain. Order yours today! 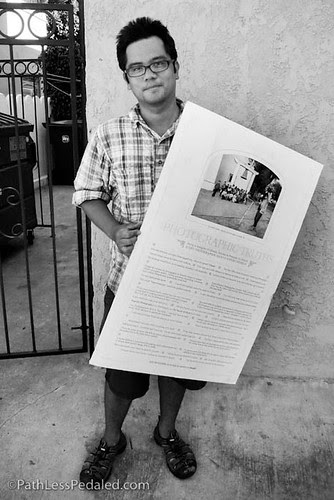 Ladies and gentlemen, the darkroom has left the building. Today, I say goodbye to a formative part of my photographic development. Gone is my 4x5 enlarger, negative drying cabinet, 20x24 easel, an entire box of obscure negative carriers, grain enlargers, etc.,

All of it. It sold to a friend of a friend. A budding photographer who took a few classes and wants to get serious. It's a great tool. I hope she uses it well.

I also gave away this poster that probably has no value except for the sentimental sort. It's a poster of Photographic Truths. It use to hang in Terry's Camera - my favorite camera store of all time - until it closed and the city unceremoniously demolished the building. I spent many a weekend there shooting the breeze with Leigh and Maurice. I would always look up the poster and laugh.

A few days before it was to close, I asked them for the poster. Sure. It wasn't worth anything and they were probably tired of it themselves. For me, however, it reminded me of those Saturday mornings drinking coffee and eating doughnuts and talking lenses and cameras. I passed it on today too - an end of an era.

For your benefit, I will transcribe some of the photographic truths:

-The Post Office folds all parcels containing photographs.
-Camera straps never fail above soft surfaces.
-Spotone bottles are designed to tip over when the cap is removed.
-You will never, EVER, receive an N.E.A. grant.
-No two lightmeters agree.
-A good photograph cannot be made in Fresno.
-A new Hasselblad would take better pictures than your present camera.
-Color slide viewing cures insomnia.
-When Man creates a sharper lens, Nature will create a fuzzier subject.
-Falling lenses are attracted to rocks.

Apologies for my crude Illustrator skills. But this or something like this is what I think the city should put up on either side of 2nd Street and in pamphlets at all the businesses. It gives instructions! There seems to be a general air of confusion down there. Some people think the stripe is a bike lane, some think it's a bike path (a recreation path like the on the sand), some think cars aren't allowed there. 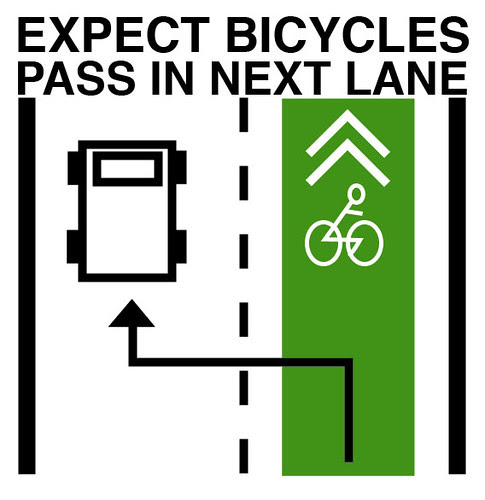 I've discovered that the green sharrow really is a Rorschach test.

For bike commuters and vehicular cyclists that understand the rules of the road it validates what they already know. Bikes can be on the road! Legally! No one ever need to fear being given a ticket for supposedly riding too far in the center ever again! Yay.

For roadies and club riders who aren't vehicular cyclists, it prods them into a better lane position. When I participated in the bike count on 2nd Street, I was shocked at how many club riders rode in the door zone! Worse yet, they would duck in and out of empty parking spaces rather than riding in a straight, visible and predictable pattern. Observing the sharrows the last few weeks, I've noticed the biggest improvement from this class of riders

With timid sidewalk riders and door zone riders who absolutely fear being in the middle of the lane and would rather choose to duke it out with opening car doors and close passes the results have been mixed. I've spotted a few that probably would have hugged the curb but are now hugging the right edge of the green paint. An improvement of sorts. However, there are still quite a few that for some reason won't ride in the middle of the lane - EVER. No amount of paint is going to help them see the light.

Some motorist feel that it is a bike only lane and move immediately to the left lane. Some motorist understand the concept and will ride patiently behind a cyclists when one is present. Some motorist think their god given right to the road has been pulled from beneath them and are internally seething.

Some business owners are supportive. Some think that bicycles will somehow slow the 5mph weekend traffic to 2mph. Some families think it's great, they can now safely ride bikes with their 6 yearolds on the street. Some residents think it is a bloodbath waiting to happen.

Rorschach test, know what I mean?

What do I think? I think its better that it's there than if it wasn't. For one, it does provide a higher level of visibility and safety for cyclists riding on 2nd Street. Secondly, it shows in an amazingly graphic way how every cyclist can ride on EVERY STREET in Long Beach. If you had some cool cycling glasses that incorporated the latest augmented reality technology that showed you where you could legally ride - every street would have that big ass green stripe.

If I were going to be in the LBC for much longer I'd take photo of the big ass green stripe and carry it around with me everywhere I go for my next conversation with a police officer, especially if it's officer Wharton. I'd also take along the City of Long Beach's Sharrow FAQ with me too.

I'm planning to make one last sharrow video....a How To of sorts for motorists and cyclist. If the city won't do it, WE have to. 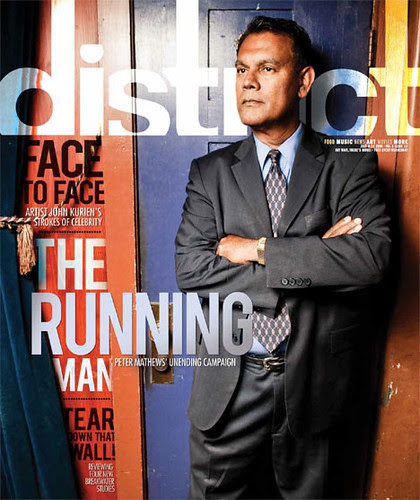 Posted by RussRoca at 3:24 PM No comments:

RussRoca
Formerly known as the "eco-friendly bicycling photographer" of Long Beach. I've since traveled 10,000 miles through the US as PathLessPedaled.com. I now find myself in the US bike epicenter - Portland. Join me as I re-enter the working world to save for the next adventure.

Slideshows of My Work

Because cameras and bikes aren't cheap! :)